Student politicians negotiate the implementation of COP21 for the Mediterranean

28 EU states and 15 countries on the southern coast of the Mediterranean basin, middle East, and Africa form the Union for the Mediterranean (hereafter UfM). End of April, more than 60 International Baccalaureate students (aged 16 to 18) met for the “Union for the Mediterranean Model” event, organised annually by the Aula Escola Europea high school. This year it the topic was the implementation of the Paris agreement on Climate Change in the UfM; due to the relevance of the topic the event was supported by the Catalan Meteorological Society (ACAM). 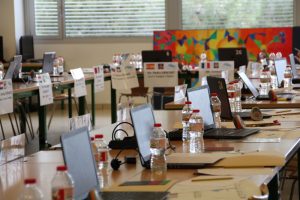 The exercise emulated the real UfM meetings UfM is an institution fostered by the European Union and established to improve relationships between countries located around the Mediterranean basin. This institution was established in Barcelona in November 1995, when the foreign ministers of the 15 EU member states and 14 Mediterranean countries met in Barcelona. The result was the Barcelona Declaration, which established foundations to build a space for dialogue, exchange and cooperation for peace, stability and prosperity, to promote democracy and respect for human rights, to lead to sustainable economic, social and environmental development, and a better understanding of different cultures around the Mediterranean.

The role of ACAM was to give an overview and to provide relevant scientific information published in the first to the fifth IPCC reports, so that all participants (all countries of the UfM) were made aware of the main challenges arising from climate change, both worldwide and especially over the Mediterranean basin.

Unfortunately, after 5 hours of discussion a consensus was not reached and consequently a declaration was not issued. The main obstacle to achieving a global declaration was the disagreement in how to finance the transition to renewable energies. Developed countries were aware that, in the past, their economic growth was based on fossil fuels. However, some of these countries were reluctant to agree to provide net economic contributions to a fund managed by a supra-state organisation, which would be responsible for investing some of the financial resources in developing countries.

As in the case of real summits, this was due to the different economic interests of the countries.