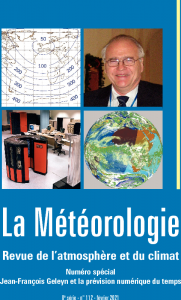 Météo et Climat has published a special issue of the journal La Météorologie on the role of Jean-François Geleyn in shaping Numerical Weather Prediction in France and in Europe. This is a follow-up to a symposium held on 6 February 2020 at the “Centre international de conférences” of Météo-France in Toulouse, in honour and memory of Jean-François Geleyn, who died on 8 January 2015.

The research activities carried out by Jean-François throughout his career, along with personal testimonies of former colleagues and friends, are described in a series of 13 articles in the French language which are made freely available. Jean-François led the international Aladin consortium from 1990 to 2010, first informally and later as programme director. This consortium was a collaboration of 16 European and North African national meteorological institutes that developed and maintained the Aladin numerical weather prediction system. Although many people contributed to this collaboration, its outstanding success was the result of the tireless efforts of Jean-François, his exceptional intellectual abilities and his unique dedication to the programme. His efforts formed the basis for the collaboration with the Hirlam consortium, which eventually led to the formation of the ACCORD consortium (www.umr-cnrm.fr/accord/). This brings together 26 countries that want to collaborate more closely with their scientific research efforts on numerical weather prediction.

Météo et Climat welcomes requests for translation and republication of its articles published in La Météorologie.

The issue comprises the following articles: