Our tweet of the month for December features wonderful photos of Kelvin Helmholtz clouds taken by Jordi Oliveres Biopulcher.  Here’s what Jordi has to say about this serendipitous encounter:
” This photo was taken at the Port del Cantó (Catalonia), on the road from Sort to La Seu d’Urgell in the Pyrenees. The altitude from which it was taken was 1720m. It was 8:30 am on December 6, 2018. The clouds were near the sunshine. We were surprised by the rarity of the clouds due to its spiral or corkscrew shape. Later we learned that they were Kelvin-Helmholtz or Fluctus clouds. We always look at the sky, day or night, because my father was a PhD in Physics and worked for many years at the Astronomical Observatory Fabra (Barcelona). I work in bioremediation of hydrocarbons in @biopulcher. “ 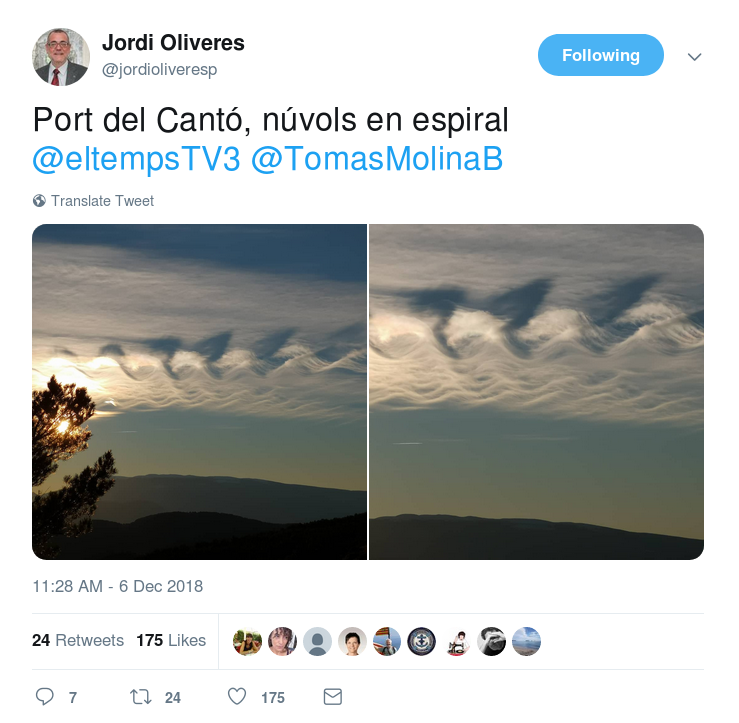 We would like to engage with more Member Societies and Associate Members through Twitter. We have started to follow the accounts of some Societies but we may have missed some. If you are the Twitter administrator for a Member or Associate Member of EMS, please consider following us at https://twitter.com/europeanmetsoc.

To ensure we see a tweet of interest for the November tweet of the month, please add the hashtag #emstweetofthemonth.