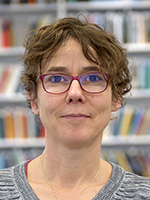 Patricia de Rosnay is leading the Coupled Assimilation Team of the European Centre for Medium-Range Weather Forecasts (ECMWF).  Her Team is in charge of the development of coupled Earth system assimilation, land surface assimilation and ocean assimilation in the ECMWF NWP systems.

She received her Ph.D degree in climate modelling from the University Pierre et Marie Curie (France) in 1999. She worked on land surface and climate modelling at LMD/IPSL (1994-2002) and on land surface remote sensing at the Centre d’Etudes Spatiales de la Biosphère  (CESBIO) until 2007. She has been at ECMWF since 2007. She is member of the HarmoSnow COST action, the H-SAF project Team, the SRNWP (Short–Range Numerical Weather Prediction Programme) surface expert team, and the
WMO SnowWatch Team of the Global Cryosphere Watch programme.