ems-messagesems-message May 2018Interview of the month: Portuguese Meteorological and Geophysical Association
01/04/2018

Interview of the month: Portuguese Meteorological and Geophysical Association

Interview with Olavo Rasquinho, President of the Portuguese Meteorological and Geophysical Association (APMG) by the EMS Liaison Committee (EMS LC) 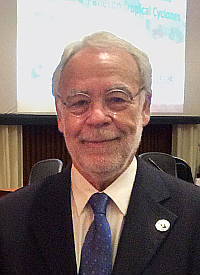 APMG: APMG is an association that strives to promote the ethical values of professionals in the fields of meteorology and geophysics and to intensify the spirit of cooperation and fellowship among associates.

EMS LC: When was APMG founded?

EMS LC: What are the objectives of APMG?

APMG: The main objectives of APMG are to:

(a) Contribute to the prestige of research, teaching and applications of meteorological and geophysical sciences and the dissemination of the knowledge gained from work done in the field and its importance;
(b) Cooperate with all institutions working to protect the climate system and prevent natural disasters;
(c) Cooperate with any bodies active in the areas of meteorological or geophysical sciences, establishing relations with them for mutual benefit;
(d) Defend the ethical and moral values of scientific and professional activities in the fields of meteorological and geophysical sciences;
(e) Promote scientific exchange with national and foreign entities;
(f) Organize and participate at congresses and other scientific meetings;
(g) Foster unity, the spirit of cooperation and fellowship among associates;
(h) Take any other initiatives, of a technical-scientific nature, deemed appropriate for the Association.

APMG: The structure of APMG is as follows:
a) General Assembly
b) Board of Directors
c) Fiscal Council

APMG: The greatest challenges are to:

APMG: We are in the process of preparing the 11th APMG symposium, which will take place in early 2019. This meeting will be held in conjunction with the 20th Portuguese-Spanish Meeting of Meteorology.

APMG: We collaborate regularly with the Spanish Meteorological Association

APMG: We expect EMS to continue to disseminate news about the events organized by APMG

EMS LC: What have been your most successful events in the last three years?

March 2015: 9th APMG Symposium on Meteorology and Geophysics, in conjunction with the 16th Portuguese-Spanish Meeting of Meteorology. The themes of the symposium were “Meteorology, Climate and Health” and “Geophysics, Energy and Pollution”.

May 2016: Colloquium “The Importance of National Meteorological and Geophysical Services – Part II”.

EMS LC: What changes do you believe your society needs to make?

APMG: APMG needs to be the editor of a publication specializing in the fields of Meteorology and Geophysics.