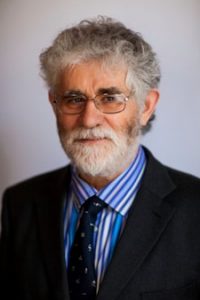 The 2014 EMS Silver Medal was awarded to Peter Lynch for his outstanding contribution to meteorological education and outreach activities, his important scientific contribution to Numerical Weather forecasting and his leadership in international collaborations.

Peter Lynch has worked tirelessly at promoting meteorological education and enhancing public understanding of meteorology and related sciences through numerous lectures, appearances on TV and Radio news channels and a topical column in a newspaper entitled “That’s Math”. He is modern with blogs and likes to share his knowledge in the media by maintaining open access to all of his publications and lecture material on the web. He is an excellent teacher and communicator of complex scientific topics.

Peter Lynch has demonstrated scientific leadership in many aspects of meteorological science, in particular in numerical weather forecasting (NWP). Most notable is his pioneering work on the method of initialization, based on digital filtering (DFI), to control spurious gravity-wave oscillations in NWP models. He was also instrumental in establishing a Community Climate Change Consortium for Ireland and led the automation and extension of the national observing network, managing the design and deployment of the unified climate and synoptic observing network (TUCSON).

Peter Lynch has been of service to the European research community through an impressive number of activities, such as being Project Leader of the HIRLAM Project (High Resolution Limited Area Model, 1997–1999), and a member of many international committees including the Scientific Advisory Committee of the European Centre for Medium-range Weather Forecasts, the International Association for Meteorology and Atmospheric Sciences and the Advisory Board for Tellus.