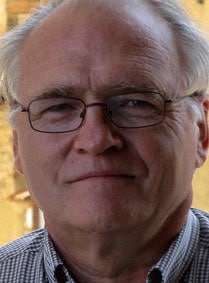 The European Meteorological Society has chosen Prof. Jean-François Geleyn as Laureate of the EMS Silver Medal 2011. He is honoured for his outstanding contributions to the fostering of cooperation among scientists in European countries. This has led to the development of a truly European meteorology community involved in numerical weather prediction (NWP).

The Silver Medal ceremony, which included the Silver Medal Lecture by Jean-François Geleyn, was held on 14 September 2011, during the EMS Annual Meeting and European Conference on Applications of Meteorology (ECAM) in Berlin, Germany. The Laudatio was given by Dominique Marbouty, the President of the EMS.

Jean-François Geleyn said “I feel tremendously honoured to receive this award. I see this also as a tribute to all my colleagues, in particular, but not only, within the ALADIN, RC-LACE and HIRLAM consortia, who were enthusiastic and supportive in developing such a truly international collaboration. The award is also a great personal stimulus to continue working with young people (such as those currently working within an EU-funded COST action) and see them strive and build on the pan-European networks that have been established in past decades. I hope that it will help me convince them that sound scientific competition is an excellent vehicle for win-win international collaboration, while a similar collaboration seen as a basis for competition between national organisational set-ups leads nowhere in the end. This path is sometimes difficult, but, when successful, even more gratifying, since you share achievements and there is no risk of a long-term backlash.”

Jean-François Geleyn has played a key role in establishing pan-European projects, and has provided outstanding leadership as project manager and creative force behind such projects. In addition, he has made numerous and wide-ranging contributions to the development of the scientific and operational aspects of NWP over the past four decades.

Among Jean-François Geleyn’s many contributions to the initiation and development of cooperative European projects, the most prominent is his commitment to the ALADIN project (a consortium cooperating on limited-area modelling now involving 16 countries). His fostering of cooperation with other European and North-African countries using the joint numerical weather prediction framework of Météo-France and ECMWF (IFS/ARPEGE), in his capacity first as International Coordinator then as Programme Manager, has been outstanding. In these roles Jean-François Geleyn supported many European countries in the development of the national meteorology community at large and specifically of national meteorological services.

Jean-François Geleyn has co-supervised PhD theses in six countries, and has been or is still teaching at the Ecole Nationale de La Météorologie of Météo-France, at the Charles University in Prague, Czech Republic and as Guest Professor at the University of Gent in Belgium. His multiple teaching and supervision assignments illustrate his commitment to reaching out to young students and communicating his own experience first-hand. In addition, he has been, and still is, very active in communicating to a broader community the progress of NWP and the links between NWP and the basic physical laws.
As well as his involvement in pan-European projects, the extensive list of Jean-François Geleyn’s research activities and publications demonstrates his versatility. For example, he was involved in the development of the radiative transfer model initially used in the forecast system of ECMWF (European Centre for Medium-Range Weather Forecasts). This, together with his other contributions to ECMWF’s first model, had a significant impact on the good performance of the ECMWF medium-range forecasts from the beginning. Other examples of studies, less NWP oriented, that paved the way for work that followed some two decades later were his pioneering work on the influence of surface albedo on medium range forecasts and the participation to the first impact study of a realistic worldwide climatology of aerosols on the main characteristics of the atmospheric circulation.

The truly European aspect of Jean-François Geleyn’s work and this lifetime achievement is recognized through the Silver Medal of the European Meteorological Society.