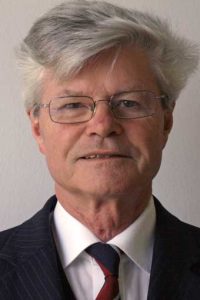 The European Meteorological Society (EMS) has chosen Professor Hartmut Graßl as Laureate of the EMS Silver Medal 2013. He is honoured for his leadership in shaping climate science and exceptional communication of climate change science to peers, political leaders and the public.

The Silver Medal ceremony, which included a Silver Medal Lecture by the Laureate, was held on 11 September 2013, during the EMS Annual Meeting and European Conference on Applications of Meteorology (ECAM) in Reading, United Kingdom.

Meteorological Services and Satellites as the Pillar for Understanding the Earth System [pdf 1.6MB]

Hartmut Graßl has demonstrated outstanding scientific leadership in many aspects of meteorological and climate science. Most notable are his pioneering work on the role of aerosols in the climate system and his strong contributions to developing European satellite missions. He was one of the first to recognise and demonstrate the importance of aerosols in the climate system from modelling and observational studies. His contributions as Chair of the Earth Science Advisory Committee (ESAC) of the European Space Agency have benefitted European science and its realisation in terms of satellite missions. He was deeply involved in ESA’s Earth Science Advisory Committee and influenced many decisions on European satellite instruments and platforms.

Hartmut Graßl has been of service to the European research community through an impressive number of activities, such as supporting the infrastructure for Eastern European research, leading international research programmes (most notably as Director of the World Climate Research Programme of WMO), acting as scientific advisor to many European organisations and research programmes, and supervising countless students and young researchers.

In addition to being an exceptional scientist, Hartmut Graßl has also shown a truly exceptional capability and passion for the communication of climate research and its implications to peers, political leaders and the general public. His engagement with governmental bodies and his direct collaboration with communication professionals have widely influenced the perception of climate issues by political leaders and by the public.

Hartmut Graßl said “Getting the prestigious EMS Silver Medal is such a high honour that I could not believe it when I heard that I might be considered for the award. Only the letter from the EMS President Marbouty convinced me. Receiving the medal, partly because of my communication of climate change knowledge to the public at large, is especially rewarding for me. After about 30 years of communicating to very diverse groups of society my experience is that only when an issue is communicated to the public with all knowns and unknowns described can there be enough pressure on politicians for them to make the informed decisions needed to solve the long-term issues. More colleagues who take a leading role in science should engage in these types of communication activity; even more so for other transgressions of humankind, such as biodiversity loss.“