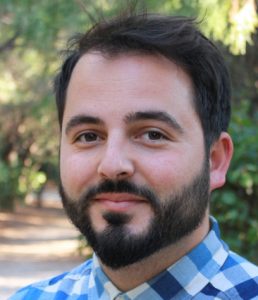 Georgios Varlas contributed significantly to the field of numerical weather prediction by developing a new integrated modelling system to simulate air-ocean wave interactions and their impact on cyclone formation. The two-way coupled atmospheric and ocean wave modelling system simulates air-sea interactions such as the modification to the air-sea fluxes and the characteristics of the atmospheric flow over the sea.

Following a B.Sc in Physics in 2010, with a specialisation in Environmental Physics and Meteorology, Georgios Varlas graduated with a M.Sc in Environmental Physics from the National and Kapodistrian University of Athens, Department of Physics, in 2012. The title of his Masters thesis is: “Study of four extreme storm events at Sparta of Greece”. He continued to work in this field and received a Ph.D in 2017, with a thesis on “Development of an integrated modeling system for simulating the air-ocean wave interactions” from the Harokopio University of Athens, School of Environment, Geography and Economy, Department of Geography.

Since 2012, Georgios Varlas has been working as a Research Assistant at the Atmosphere and Climate Dynamics Group at the Harokopio University of Athens, collaborating with several institutions such as the Hellenic Centre for Marine Research and the Hellenic National Meteorological Service.

Georgios’ career and research activities have been devoted to the study of Synoptic and Dynamic Meteorology as well as Numerical Weather Modelling. As part of his postgraduate diploma thesis, he studied the synoptic, dynamic and thermodynamic characteristics of thunderstorms. It was during this study that he became familiar with meteorological modelling and its capabilities, which led to him deepening his knowledge of the field. Consequently, his doctoral research was dedicated to the simulation and analysis of air-ocean wave interactions and their impact on cyclone formation, leading to the development of the Chemical Hydrological Atmospheric Ocean wave System (CHAOS), an integrated modelling system simulating the air-ocean wave interactions. CHAOS was employed to analyse the impact of ocean waves on the air-sea momentum-heat-moisture exchange and, subsequently, on processes in the atmospheric boundary layer and the middle-upper troposphere. In addition, CHAOS supported the investigation of phenomena such as air-sea spray and rain-wave interactions.