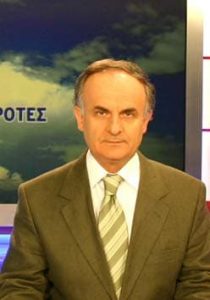 The 2013 EMS Broadcast Meteorologist Award acknowledges the life achievement of an outstanding broadcast meteorologist, the “vocie and face of weather” in Greece.

Dimitris Ziakopoulos who has presented the weather forecast for the Greek Public National Television for 29 years, succesfully combined this responsibility with his post as a forecaster and since 2007 as Head of the National Meteorological Forecating Centre of the Hellenic Meteorological Service (HNMS).

In 1985 he introduced a special TV programme “Weather for farmers” which included a six-day weather forecast issued by the Hellenic National Meteorological Service and also special advisory information for farmers prepared by the agronomists at the Hellenic Ministry for Rural Development and Food.
This programme was broadcast for 25 years, days and time remained unaltered throughout this period. It quickly became the most credible weather TV programme, not only for farmers.

Dimitris has also published a science book aimed at the wider public (“Weather, the son of Earth and Sun”, 2009) as well as a number of scientific papers.