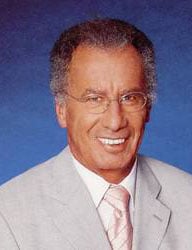 The 2011 EMS Broadcast Meteorologist Award was presented to Dieter Walch to honour his long and fruitful professional career and the achievements of an outstanding broadcast meteorologist.

For many Germans the name “Dieter Walch” is closely related to the television weather forecast. Dieter has acted for more than 25 years as the leading German weather presenter at ZDF German National Television. He has studied Mathematics, Physics and Meteorology at the Free University of Berlin. After receiving his Master in Meteorology, he worked as a Flight-Meteorologist, before he joined the German Air Force Weather Service as assistant professor. During this time the German National Television offered him the position of a TV-Meteorologist.
He has also written books about Meteorology, TV-Meteorology and Climate.