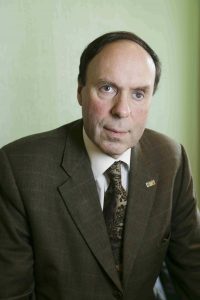 The EMS has chosen Anton Eliassen as Laureate of the EMS Silver Medal 2015. He is honoured for his scientific contribution to environmental meteorology, his outstanding service to the European and international meteorological community that was e.g. central for the success of the Convention on Long-Range Trans-boundary Air Pollution, and his major role in increasing and enhancing the public under-standing of meteorological information through his pioneering efforts to make meteorological data freely available.

The Silver Medal ceremony, which included the Silver Medal Lecture by the Laureate, was held on Tuesday, 08 September 2015, during the EMS Annual Meeting and European Conference on Applications of Meteorology (ECAM) in Sofia, Bulgaria.

Anton Eliassen said “I feel most honoured and happy to receive the EMS Silver Medal. It has never occurred to me that I might be awarded such a fine prize.”

Anton Eliassen undoubtedly had and has a great influence on shaping the meteorological landscape in Europe over the past decades. He has had a leading role in the governance of most European meteorological organisations and in the international meteorological community. His outstanding leadership and capabilities to integrate has contributed to the development of the European Meteorological Infrastructure within ECMWF, ECOMET and EUMETSAT and WMO.

Anton Eliassen is an outstanding researcher, he has made significant scientific contributions to environmental meteorology through his pioneering work on the modelling of the long range transport of air pollutants since the early the 1970s, resulting in a range of very important findings and providing the technical underpinning of the Convention of Long Range Transboundary Air Pollution and its ensuing Protocols for the reduction of air pollution emissions in Europe.

In 1970 Anton Eliassen graduated in meteorology from the University of Oslo. From 1972 he worked as a scientist at the Norwegian Institute for Air Research (NILU), and from 1978 at the Norwegian Meteorological Institute (DNMI); in 1983 he became Chief Scientist at MET Norway.
From 1984 to 2000 he was Adjunct professor in meteorology at the University of Oslo (UiO).
After having served as Director of Operations at DNMI from 1989 to 1997, he became the Deputy Director General, and in 1998 Director General.

Leadership positions in international organisations include