This article by Rasmus Benestad, co-founder of RealClimate.org, is reproduced here by kind permission of the author.  He is a climate scientist at the Norwegian Meteorological Institute and a member of Oxford Research Encyclopedia advisory board on climate sciences. He is a member of the EMS Media and Communication Committee and chairs the selection committee for the EMS Journalist Award.

If you want to make a difference as a scientist, you need to make sure that people understand the importance of your work. Conferences give you one opportunity to explain what you’ve found out.

I sometimes wonder if the value of attending conferences is sufficiently appreciated. You can save time getting an overview over your field of research and catch up on the latest developments, which would take many weeks just from reading papers (and it gets harder these days to find the time reading papers).

Another benefit is being able to meet colleagues and discuss the latest findings and your results. In addition to sharing your thoughts, you represent your institution and enhance its visibility. Organisations pay a lot of money for increased visibility.

This week, I have listened to many good and interesting talks at the European Meteorological Society’s (EMS) annual meeting in Budapest (#emsannual2018), a meeting place for weather and climate experts across Europe and the rest of the world.

I usually try to detect the buzz and the main themes and issues discussed by the community during such conferences. My impression is of course subjective and biased by the talks I attended, but I also get an impression about activities within the meteorological and climatological community by reading the posters.

Climate change and its impacts on society were main overarching themes, but with a strong focus on regional aspects. Other headlines were education, weather/impact forecasting, models, historical observations, extremes, attribution of weather events to climate change (World Weather Attribution), and return value analysis.

As usual, the EMS conference covered mainly applied climate science and meteorology. For example, what does “heavy rain” mean and how is it understood by the public? I listened to talks about European and American tornadoes, extreme precipitation, and their radar signatures. Apparently, there are more fatalities from extreme rainfall, but more injuries associated with tornadoes.

The European Copernicus Climate Change Services (C3S) had a strong presence at the conference, and some of the presented work was associated with Horizon2020 projects. Both of these involve large collaborative research efforts across Europe.

I also listened to a session on international cooperation for capacity building and improving climate services in developing countries. But I wonder if some of this effort can be a little overconfident. The reason for my concerns is that such efforts often are based on simulations from a project called CORDEX, but the number of simulations often involves a small number of model runs.

The utility of climate change projections is limited by “the curse of small numbers”, because even perfect models would give misleading results if there also are pronounced but unpredictable natural variations present (Deser et al., 2012). The CORDEX community still has a limited set of regional climate models (RCMs).

It is possible to use empirical-statistical downscaling to make use of far larger multi-model ensembles, but this type of approach has not played a big role in CORDEX. Proper downscaling should involve both strategies because they have different strengths and weaknesses and can complement each other.

Another thought that struck me was that much of the discussions were about how to get something from next to nothing (i.e. little funding) for such projects. I think there is way too scarce funding for climate services in both developing countries as well as in Europe (perhaps with the exception of C3S in Europe).

Science communication was emphasised at the conference, and even highlighted though graphical note taking done by illustrators. One example is the picture below. 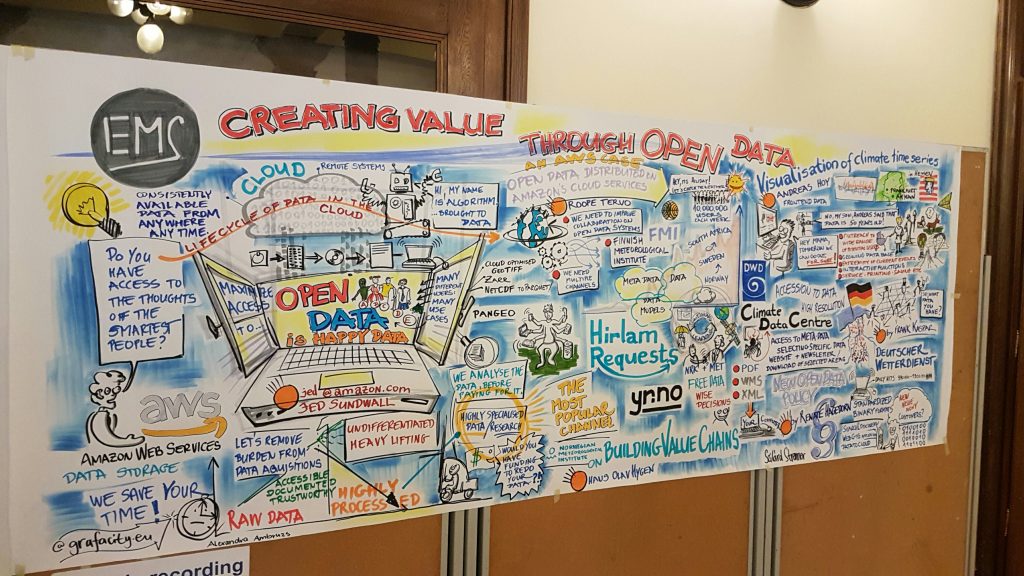 The EMS outreach award was this year given to The Royal Meteorological Society’s free and open online MOOC “Come Rain and Shine“, which train teachers. But I also learned about another community of climate communicators called Climate without borders.

One lesson from the conference was that people apparently have had enough of the phrase “climate change”, and we need to talk about it in different terms, such as how the temperature has changed where people live. Or how increasing rainfall amounts lead to flooding and how increasing sea-levels inundate coastal regions.

I think that some of the presentations at EMS2018 could have been of interest for a broader audience, but didn’t see much presence from the media, apart from when the TV broadcast award was presented. On the other hand, most of the talks would perhaps be more technical than what the average journalists would like.

Some talks were difficult to follow, even for experts. That is wasted opportunity, and I think one mistake is to put too much text on the slides, or have too busy slides, and too many of them. It may not necessarily be a big problem if it were the only talk at the conference, but when I spend a whole week attending a conference, and it is easy to get fatigued.

I also think we have developed a bad habit of using too many abbreviations. They require that people have to memorise them while they try to follow the talk.

I would also advise practicing the talk before the conference by presenting it for people who are not too familiar with the topic. Keep it simple. Don’t expect the audience to digest a difficult and complicated chain of reasons. And don’t try to cram in too many points. The same goes for posters. It is easy to shine by investing a little effort up front. And it’s of course important to keep the time.

One interesting thought is to have a short session on communication for conferences, based on what the attendees actually take away. The EMS conference has now a new structure compared to earlier years, and I think this change has been successful.

The bottom line is you need to make sure that people understand the importance of your work.

Finally, another new thing this year was the new general data protection regulation (GDPR) in Europe, which restricted the use of photos during the sessions. This may perhaps have limited the distribution of pictures from the talks on social media.