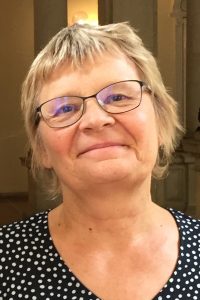 Heinke is the current Treasurer of the EMS since 2015. She has been re-elected for a 3-year term until autumn 2024.

Heinke is national delegate for the scientific advisory group of WMO – GAW „Urban Research Meteorology and Environment“ (GURME). She is chair of the steering group for development of guidelines on “Environmental Meteorology” of the German Commission for Clean Air within VDI and DIN, member of several related topical working groups and national delegate for the development of a European Norm in model quality assessment (air quality assessment). Heinke is member of the climate board (Klimarat des Senats) as well as the environmental protection board (Naturschutzrat) of the state of Hamburg.

Heinke is professor for Meteorology at the Universität Hamburg. Until her retirement in 2021 she chaired the group on mesoscale and microscale atmospheric modelling at the Meteorological Institute, coordinated the urban systems research at Center for Earth System Research and Sustainability and was member of the scientific steering board for climate research Clusters of excellence CLISAP and CLICCS at Universität Hamburg. She has been chair of the scientific advisory board at Leibniz Institute for Tropospheric Research TROPOS (2017-2020) and was member of the review board on “Atmospheric Science” of the Deutsche Forschungsgemeinschaft (German Research Foundation, DFG, 2016-2020). She was member of the scientific steering committee of International Technical Meeting on Air Pollution Modelling and its Application (2011-2016), and of the executive board of International Association for Wind Engineering (2011-2015) and host of the CWE2014. She chaired or co-chaired several national and European research projects. She is member of editorial board of “Meteorol. Z.” (english Journal) and reviewer for several scientific journals.Heinke received in 2015 the honour medal of the German Engineering Association (VDI) for Work in several work groups of Commission for Clear Air and in 2021 the Reinhard-Süring-Plaque by the German Meteorological Society (DMG) for nationally and internationally very successful work in the field of environmental meteorology.