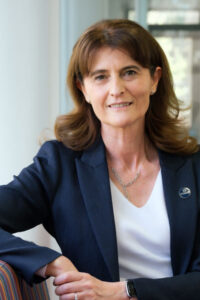 Dr Rabier has been Director-General of ECMWF since January 2016, leading the intergovernmental organisation through a period of major changes. Dr Rabier is an internationally recognised expert in Numerical Weather Prediction, whose leadership has greatly contributed to delivering major changes at both ECMWF and Météo-France.

She is especially well known within the meteorological community for her key role in implementing an innovative data assimilation method, which was a first worldwide and contributed to an optimal use of satellite observations in weather forecasting. She also led an international experiment involving a major field campaign over Antarctica, in the context of the Fourth International Polar Year and the WMO THORPEX programme.

She is currently chairing the Advisory Committee for Earth Observations of the European Space Agency and a member of the International Scientific Board of the International Foundation Big Data and Artificial Intelligence for human development.
She has been awarded the title of “Chevalier de la Légion d’Honneur”, and the Great Prize of the Air and Space Academy for the IASI project (Infrared Atmospheric Sounding Interferometer) and its atmospheric and weather applications. She is also an Honorary Member of the American Meteorological Society.