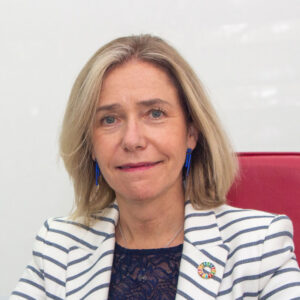 Professor Celeste Saulo is the First Vice-President of WMO. She has been the Director of the Argentinean National Meteorological Service (SMN) and Permanent Representative of Argentina at WMO since July 2014 and was elected to the WMO Executive Council in June 2015. She has been a member of the WMO World Weather Research Programme (WWRP) Scientific Steering Committee since 2011 and has served on various WMO panels related to her field of knowledge. She is full professor at the University of Buenos Aires and research scientist at the National Council for Scientific and Technical Research.

As the Director of the Argentinean National Meteorological Service, she has pursued its modernization based of the three axes: enhancement of monitoring, of quality of forecasts and of communications with society. Thus, she has given rise to interinstitutional and interdisciplinary effort and dedication to contribute to the commitments made by the country with regards to the 2030 Agenda for Sustainable Development and the Sendai Framework.

Under her direction, the Argentinean National Meteorological Service has been a venue for various capacity development activities for Meteorological and Hydrological Services of developing countries, with a specific focus on training in accordance with the country’s role of Regional Training Centre.