EMS LC: If you were to describe your society in one sentence, what would you say?
KPN: The Danish Meteorological Society encourages meteorological understanding among anyone interested in weather, climate or meteorology in the broader sense.

EMS LC: What are the objectives of DaMS?
KPN: Besides the general promotion of meteorology, the society publishes the quarterly magazine “Vejret” (The Weather) and every year we arrange several lectures and colloquia about meteorological issues of the day.

EMS LC: Could you explain the structure of your membership?
KPN: The society is open to all, including international members. Institutions, companies and students can also be members. Students get a discount. Every second year we declare one or more honorary members. Honorary members receive a free lifetime membership of DaMS.

EMS LC: What are DaMS’ recent achievements?
KPN: In 2017 DaMS arranged two lectures and one colloquium. The first lecture was on storm surges from the Baltic Sea by Sebastian Pelt. This was held before our general assembly at DTU Risø Campus. The colloquium was on meteorology in the media and was held at the Danish public broadcasting company DR. Finally we held our annual Christmas meeting at the offshore wind turbine company Ørsted. Here Mikkel Gryning and Nicolai Nygaard spoke of wind as an energy resource, and how Ørsted uses wind measurements and analyses to design offshore wind farms. In 2018 the DaMS general assembly was held at Air Base Karup, where Kenneth Henriksson and Brian Højen-Sørensen gave lectures on military meteorology and oceanography, respectively.

EMS LC: Where do you see the greatest challenges?
KPN: DaMS is a non-profit organisation, where all contributions are voluntary. In particular regarding our magazine Vejret, which contains almost exclusively original material, this is a challenge. To have maintained regular quarterly publications of Vejret for almost 40 years under these conditions is an impressive feat – particularly by our perennial Chief Editor John Cappelen and Senior Editor Leif Rasmussen. The contributions of the other editors Anders Gammelgaard, Jesper Eriksen and Jesper Grønne are also considerable, and we are very lucky that they take the time to do this.

EMS LC: Which activities are you planning for the coming months?
KPN: Our Autumn meeting will be held on November 1st at DMI with a lecture on crowd-sourced data for improving the HARMONIE-AROME meteorological model by Kasper Hintz. On December 13th we will have our Christmas meeting at DTU Risø Campus with a visit to the newly constructed Poul la Cour wind tunnel and lectures by Andrea Hahmann and Anna Maria Sempreviva on the meteorological modelling activities at DTU Wind. Our 2019 general assembly is planned to be held in the historical auditorium at the Niels Bohr Institute where many quantum physics legends convened in the early 20th century.

EMS LC: Are you collaborating with other EMS Members?
KPN: We collaborate with the southern branch of the Swedish Meteorological Society and exchange meeting invitations with them. The Nordic Meteorology Meeting is also a collaboration between the five Nordic Societies (Denmark, Norway, Sweden, Finland, Iceland) with each Society taking its turn to organise the meeting.

EMS LC: What do you expect from the EMS? In what ways can it help you to develop your activities?
KPN: Our society is run very much independently from EMS. Almost all of our activities are in Danish, as our broader membership base are not necessarily well versed in the English language. Thus, we do not expect much from EMS.

EMS LC: What have been your most successful events in the recent years?
KPN: In 2012 we arranged the Nordic Meteorology Meeting in Copenhagen, which was attended by 70 people and lasted a whole week. In 2012 we also arranged a colloquium on solar energy that was attended by more than 100 people. In 2015 a lecture on large scale energy storage by Henrik Stiesdal also gathered a large crowd. Mostly, we do not get such attendance at our events, but once in a while we hit a topic that really attracts people.

EMS LC: What changes do you believe your society needs to make?
KPN: Meteorology and climatology as such are broadly acknowledged among the general public and in the media; however, the importance of high quality collection of meteorological ground-based data is too often forgotten. Ground-based meteorological equipment is costly to operate and maintain. The politicians do not seem to appreciate how important these data are overall. If we as meteorological societies could do more to promote such data collection it would be very good. 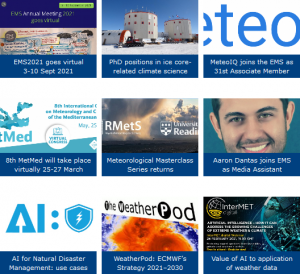