Award for an outstanding achievement in biometeorology

The EMS Tromp Award for an outstanding contribution in biometeorology 2020 will be presented to Prof David M Schultz, Centre for Crisis Studies and Mitigation, and Centre for Atmospheric Science | Department of Earth and Environmental Sciences | The University of Manchester. He is awarded for the publication: “Weather Patterns Associated With Pain In Chronic-Pain Sufferers”, published by American Meteorological Society in BAMS in 2020.

Outline of “Weather Patterns Associated With Pain In Chronic-Pain Sufferers”

The belief that weather influences people’s health has been prevalent for millennia. Recent studies on the relationship between weather and pain for those who suffer from chronic pain remain indeterminate, with some studies finding strong effects and others finding no effects; most studies face limitations to their study design or dataset size. To address these limitations, a U.K.-wide smartphone study Cloudy with a Chance of Pain was conducted over 15 months with 10,584 citizen scientists who suffer from chronic pain, producing the largest dataset both in duration and number of participants. Analysis of the dataset using synoptic climatology and compositing revealed the daily weather associated with a prevalence of high pain and low pain across the population. These synoptic weather patterns support the beliefs of many participants who said that low pressure—and its accompanying weather—was associated with a pain event.

Prof David M Schultz: »This paper is based on data from the Cloudy With a Chance of Pain project, a citizen-science smartphone study to look at the effect of weather on pain. I was asked by the founder of the project Will Dixon, a professor of digital health, to get involved. Other papers arising from the project explored the data using epidemiological methods; I studied the data using meteorological methods. The project was a perfect mix of disciplines from clinical medicine, biostatistics, epidemiology, mathematics, psychology, and meteorology.«

Interview with the Awardee

How did you come across the call for the EMS TF Award?

How did you decide on a scientific career in meteorology? Were you interested in weather already as a child?

I had interests in many sciences as a child. There’s not a particular event or moment when I decided I would be a meteorologist that I can easily point to. I was studying geology as an undergraduate, but I felt more satisfied studying the weather.

What do you think about the role of journalists in raising public awareness and disseminating scientific findings to the public?

Most people get their news from media sources, particularly online. Therefore, it’s important that journalists be able to communicate clearly and accurately new discoveries in science, including being able to distinguish science from pseudoscience to their audiences.  Journalists who can communicate uncertainty among the scientific disciplines to the public without losing the public’s confidence in scientists and science is also a highly desired skill. It’s heartening to see more web sites for news sources having a dedicated science column, perhaps with some clever scientific infographics and other new means of presenting scientific data to the public. But, the responsibility also falls on scientists to be able to communicate their results to non-specialists in science, to help the journalists understand the science. It works both ways.

How important are communication skills for a scientist?

Having written a book about communication skills for scientists (Eloquent Science: A Practical Guide to Becoming a Better Writer, Speaker, and Atmospheric Scientist), I am a strong believer in the importance of communicating science clearly and understandably to all audiences. In part this is because I felt that I struggled with writing myself in my schooling, as well as early in my career.  Anyone can be taught to be a better writer.

Who were your role models in scientific community?

I discovered many of my role models while a graduate student, when I was reading the scientific literature and trying to understand how I could contribute to science myself. These role models were scientists who could write clearly and explain their science in an interesting way. They wrote in such a way that I didn’t feel like I was struggling to read the article. Their figures were often carefully constructed and legible. They understood the history of the discipline and were not afraid to incorporate that scholarship into their own science. These were giants in the field such as Chester Newton, Tor Bergeron, Erik Palmén, Jerome Namias, Fred Sanders, Keith Browning, and Mel Shapiro. My style and interest in science has been heavily influenced by them and their work.

For my PhD, I had the pleasure of being supervised by Lance Bosart and Dan Keyser, both talented writers and scientists, but each of them brought something different to my education. Many of those lessons have been instilled into my own teaching and my own supervision of research students. One thing that Lance taught me was to never fear trying something and failing. One thing that Dan taught me was the value of understanding your students and what they want from their education.

I mention their influence on my teaching because communicating research has a lot of similarities to teaching. I often treat my scientific articles as if I’m trying to teach someone how to learn this material.

I just want to thank the EMS and Tromp Foundation for their support and honouring me in this way.  I was really surprised to find out that I had received this award. 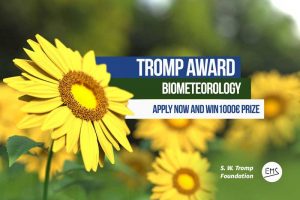 The Tromp Foundation (Foundation for Biometeorological Research), the legacy of Solco W. Tromp, is funding this award with the intention to promote biometeorology in Europe. Biometeorology is an interdisciplinary science studying the interactions between atmospheric processes and living organisms – plants, animals and humans. It provides answers to the question How does weather and climate impact the well-being of all living beings?