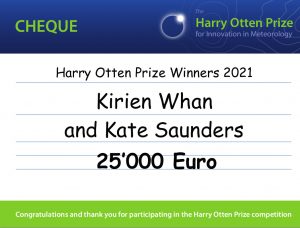 The Harry Otten Prize for Innovation in Meteorology has been awarded for the fifth time. During the Annual Meeting of the European Meteorological Society the jury announced that Kirien Whan, from the Royal Netherlands Meteorological Institute (KNMI) and Kate Saunders from the Queensland University of Technology (QUT) have won the first prize of 25,000 Euro. Their idea, Second Wind: Extending the official wind gust record with citizen science observations, is to use citizen observations of wind gusts, apply new methods of quality control to them and integrate the data into observations taken from standard measurement networks. Wind gusts are causing severe damages. Every seven out of eight weather warnings issued by KNMI in 2018 involved extreme wind gusts. Often, high wind gusts occur very locally, in between the traditional measurement network. A more detailed picture of the wind gusts can help to alert the public further in advance and more accurately.

The winners of the prize were selected from three finalists. The other two finalists received 2,500 Euros for their ideas.

Moritz Mauz from the University of Tübingen in Germany presented his innovative idea called A high-frequency chilled-mirror hygrometer for turbulent stationary and airborne dew-point measurements. He proposed a small, lightweight, accurate and fast instrument that can measure turbulent moisture fluxes. The instrument can be operated on the ground or even mounted on an unmanned aircraft. This can help to better understand moisture fluxes in the boundary layer and eventually improve weather forecasts.

Joshua Soderholm from the Australian Bureau of Meteorology called his idea Observing the Impossible – in situ observations of hail trajectories using the HailSonde. His goal is to release probes into thunderstorms to better understand the path hail stones take within the cloud until they hit the ground. The benefits would be more accurate predictions of hail events reducing false alarms. Retrospectively, more precise hail swaths can help insurances to better deal with hail events, also in urban areas.

The jury received applications for the prize from different European countries, Australia, and the USA. The Harry Otten Prize is awarded every two years. More information is available at the website at www.harry-otten-prize.org.
Pam Emch, Chairman of the Board of the Harry Otten Foundation, commented, “The idea put forward by Kirien Whan and Kate Saunders can bring direct benefits to society. A more local understanding of wind gusts can help to prevent damages and loss of life. Observations taken by citizens will lead to better protection from these severe weather events.”

Harry Otten was pleased at the announcement of the 2021 winner of the Prize: “Innovation has been an important driver for the weather industry and still is. There are many public services among the customers of my venture Wettermanufaktur which potentially can benefit a lot from the implementation of the winning idea to use wind gusts observations from citizen weather stations.”

Pamela Emch
Chair of the Harry Otten Board