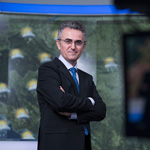 Zoran Vakula received a degree in meteorology at the faculty of physics and geophysics in Zagreb.
His long, distinguished career in meteorological science began as a forecaster with the Croatian National Meteorological Service (DHMZ). He presented his first weather forecast on HRT on 5 August 1996. Later, he became head of the Forecast Office, and then moved to work full-time with HRT in 2013. At present, he is the most experienced weather presenter on television in Croatia.

Zoran Vakula’s strong professional and scientific background is combined with excellence in presentation with a high level of skill and an easy communication manner evident in his broadcasts. He initiated numerous outreach initiatives; in particular his work on developing a competition and subsequent exhibition of cartoons with a weather theme stands out. This initiative brought meteorology to a wide audience in a novel and entertaining fashion without trivialising the underlying science.
Noting the successful engagement of Zoran Vakula with the “Dancing with the Stars” TV programme and other media contexts where meteorologists are not typically seen, it is recognised that he had become a popular “household name” in Croatia. This stature enabled him to be all the more effective in his weather broadcasting and communication.