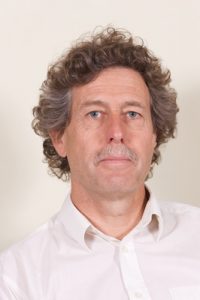 The European Meteorological Society has chosen Prof. Tim Palmer as Laureate of the EMS Silver Medal 2012. He is honoured for his pioneering work on predictability of weather and climate and for his outstanding skills and commitment in communicating the underlying concepts to non-specialists and the general public in Europe and beyond.

The Silver Medal ceremony, which included a Silver Medal Lecture by the Laureate, was held on Wednesday, 12 September 2012, during the EMS Annual Meeting and European Conference on Applied Climatolology (ECAC) in ?ód?, Poland. The Laudatio was given by Dominique Marbouty, the President of the EMS.

Tim Palmer said “I feel tremendously honoured to receive this award, especially as many of my colleagues are members of the European Meteorological Society. Indeed, I would like to acknowledge the key contributions of many of these colleagues to my own research over the years – I would not be receiving this award were it not for them. In meteorology, perhaps more than in many other sciences, we benefit enormously from collaboration between individuals and institutes in Europe. I am firmly of the belief that progress towards the key challenge of providing society with reliable forecasts across the range of weather and climate timescales, can only come from such collaborative activity.”

Tim Palmer’s work has been instrumental for the current understanding of climate dynamics, and weather and climate predictability. His research spans a wide variety of areas, from the theoretical to the practical, for issues related to the predictability and dynamics of weather and climate. On the theoretical side, he is especially interested in aspects of the climate system which exhibit nonlinear behaviour, for example where atmospheric processes on different space and time scales interact. This has led him to try to recast the basic equations for climate prediction as stochastic rather than deterministic.

His outstanding and world-wide recognised research on weather and climate predictability and the use of ensemble forecasting have all had a significant impact and have led to the development of a wide range of new operational products across Europe. Many of these products are now widely and regularly in use as a basis for providing weather warnings for the protection of life and property. Few individuals have had such a direct impact on the meteorological infrastructure and its ability to provide significant improvements in forecasts available to European citizens.

Tim Palmer, being an exceptional and outstanding scientist, has also made tremendous contributions to enhance public understanding. His ability to explain the complex concepts of weather and climate prediction to non-specialists and the general public is fascinating and stays in the memory of everyone who has had the chance to listen to one of his presentations. He shows a dedication to the communication of scientific issues and debates that is truly admirable. This is a unique trait of Tim Palmer.

Beyond the contribution he has made individually, Tim Palmer’s early work as co-ordinator of the European Union 4th Framework PROVOST (Prediction of Climate Variations on Seasonal to Inter-Annual Timescales) programme and the 5th Framework DEMETER (Development of a European Multi-model Ensemble System for Seasonal to Inter-Annual Prediction) project has led to the emerging of a whole new community of scientists working on these important new topics within Europe.