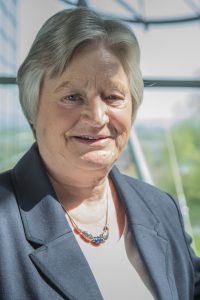 The European Meteorological Society has chosen Julia Slingo as Laureate of the EMS Silver Medal 2017. She is honoured for her outstanding contributions to meteorology and climate predictions. She has led the work that brought new understanding of monsoons and intraseasonal variability associated with the Madden-Julian Oscillation. As a strong advocate of seamless weather and climate prediction she was at the forefront of its development and implementation. Through her inspirational leadership she facilitated joining together strong relationships, frameworks and networks. She championed the importance of communicating the dangers of climate change to decision makers and the public.

From Weather to Climate: Responding to Climate Risk across Timescales

As Julia Slingo could not attend the ceremony, she gave her presentation as a strategic lecture during the opening session of the EMS2018 in Budapest in Sepetember 2018.

The Laudatio however, was given in September 2017 by Florence Rabier, Director General of ECMWF.

Professor Dame Julia Slingo has made an outstanding contribution to meteorology on an international scale. Throughout her career Professor Slingo has brought innovative approaches to understanding and modelling weather and climate; these have led to new insights into how the atmosphere and climate system works and to significant advances in predictive skill. Her appointment as Met Office Chief Scientist in 2009 recognised that contribution and the science leadership she has provided to the UK and international research community. Professor Slingo retired in December 2016 after a long and distinguished career.

In her early career Professor Slingo contributed to significantly improving our understanding of clouds and how they interact dynamically with the atmosphere, carrying out work at the Met Office, European Centre for Medium-range Weather Forecasts (ECMWF) and the National Center for Atmospheric Research (NCAR).

Returning from NCAR she joined the Department of Meteorology at the University of Reading where she founded the group on tropical climate. This group is still undertaking ground-breaking work in tropical convection, monsoons, climate variability and in seasonal and decadal prediction. Her own interests led to a very distinguished research interest in the Asian monsoons. She is one of those rare scientists who has been able to contribute to both our core understanding and to advance our capabilities in mitigating adverse impacts of the monsoon.

Professor Slingo was the first female Professor of Meteorology in the UK and led the UK’s climate science community as Director of Climate Research in NERC’s National Centre for Atmospheric Science where she pioneered high resolution climate modelling. In 2006 Professor Slingo was the founding Director of the Walker Institute, which today has an international reputation for its interdisciplinary work on addressing the challenges of a changing climate. More latterly, as the Met Office Chief Scientist, she has strengthened the scientific and technical programme within the Met Office, driving forward the integration of weather and climate science, and building strong partnerships between the Met Office and the wider research community.

Julia Slingo has championed the importance of communicating developments in atmospheric and climate science with a wide audience. She led the development of the Met Office’s Research News web pages, which provide insights into atmospheric science for educated non-expert readers.

In 2015, Professor Slingo was appointed as one of the seven members the High Level Group of the new European Commission Scientific Advice Mechanism group.

Since her retirement Prof. Slingo has continued to be active in weather and climate science, serving on a number of committees and acting as Special Advisor on Climate to the Secretary General of the World Meteorological Organization.

In 1972 Julia Slingo graduated from Bristol University with a B.Sc. in Physics, and in 1989 with a Ph.D. in Atmospheric Physics. From 1973 to 1980 she worked at the Met Office as Scientific Officer and later as Senior Scientific Officer.