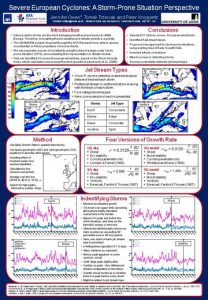 This visually appealing poster attracts the reader’s eye to a set of four maps documenting some characteristics of the well-known wind-storms Kyrill, Emma, Klaus and Xynthia. A set of four corresponding diagrams depicts the evolution of different indicators for potential developments of wind-storms within an area covering Western Europe and the North Atlantic, during a 6-month period for each storm. Boxes, which are neatly placed around and between the two main figures, explain in a clear and concise way (a) the general goal of the study, namely to identify “storm-prone situations” and evaluate their representation in climate models; (b) the methodology based on scientific aspects which are, albeit not new, well referenced; and (c) the conclusions that four different jet types could be successfully identified and that individual storms, however, cannot be easily associated with one singular type. The results are potentially important for the predictability of wind-storms, and – to an even greater extent – for assessing a possible increase in the number of severe storms related to climate change.