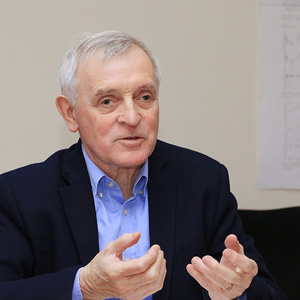 Fundamental and pioneering scientific contributions to the understanding of paleo, present and future climate processes

Jean Jouzel was selected as Laureate of the EMS Silver Medal 2020 for his fundamental and pioneering scientific contributions to the understanding of paleo, present and future climate processes, as well as his outstanding contribution to increase public knowledge and awareness of climate change.

Silver Medal Lecture: “Our climate: from past to future“

Jean Jouzel, climatologist, Emeritus Research Director at the Commissariat à l’énergie atomique et aux énergies alternatives (CEA), is a specialist in paleoclimatology and past Director of the Institut Pierre Simon Laplace. His fundamental and pioneering work in the study of polar ice cores, has revolutionised the understanding of the role of high latitudes in the Earth’s climate system.

His interest in climate and ice core research is related to the use of the water stable isotopes in atmospheric science and as a tool for reconstructing the temperature and the hydrological cycle of the past. His innovative scientific contributions significantly improved our understanding of the climatic interpretation of the ice core records.

Jean Jouzel’s impressive list of publications, more than 400 papers with most of them in high-impact journals, testifies to his fundamental contribution in paleoclimate research for a better understanding of our present and future climates.

He is a dedicated to communicating the science associated with climate issues to policy makers and the general public. He is very sensitive to the need to adjust the content and language of any communication to meet the needs of the audience. Being a well-known scientist on climate-change, Jean is regularly asked for interviews and for conferences. Though now retired, he is very keen to answer positively and spends a lot of time in these activities. Jean has also written ten books for the public, explaining climate change, but also calling for actions and proposing solutions, in particular about the necessary funding for attenuation and adaptation at European level.

Jean Jouzel has inspired many scientists from several countries, most of them being past PhD students of his. From 1995 to 2001 he chaired the scientific steering committee of the iconic European Project for Ice Coring in Antarctica (EPICA), revealing the climate and greenhouse gas contents of the past 800,000 years. The EPICA project has been awarded the 2008 EU Descartes Prize.

Jean Jouzel has been awarded numerous prizes,including: Milankovitch Medal from the European Geophysical Society in 1997, CNRS Gold Medal, France’s highest scientific distinction, in 2002, Roger Revelle medal from the American Geophysical Union in 2003, and  Vetlesen Prize for his work on polar ice and climate in 2012. This prestigious prize, awarded every four years since 1959, is considered to be the “Nobel Prize” for Earth and Universe Sciences. Jean is also a foreign member of the US National Academy of Sciences since 2016 and member of the French Academy of Sciences since 2017.

Jean Jouzel has served as Vice Chair of the Working Group I of the IPCC from 2002 to 2014. In 2007, IPCC was awarded the Nobel Peace Prize while he was Vice Chair.

Education and Research Experience Since 2015