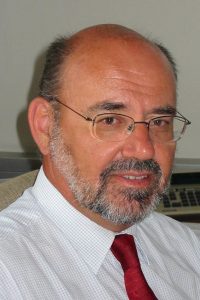 Fritz Neuwirth was honoured for his long‐term support for the EMS, which started with contributing to the establishment of the EMS and continued with displaying wisdom and enthusiasm as President, member of the Editorial Board and Councillor.

In September 1998 a working group was convened to propose the composition, purpose, financing and organisation of the EMS. Fritz Neuwirth (Österreichische Gesellschaft für Meteorologie) participated in that working group, the outcome of which led to the formal establishment of the EMS in 1999; he was one of three Vice-Presidents for the first two years of the EMS. Since then Fritz Neuwirth has been a friend and supporter of the EMS. In 2008 Fritz became the EMS President and the EMS flourished under his guidance and leadership. At the end of his period of office, he continued as a member of the Editorial Board and in 2015 started a three-year period as a member of Council. Over many years the EMS has benefited from Fritz’s wisdom, enthusiasm and good humour, and his ability to get to the heart of a problem and propose workable solutions.

Here is an interview with Fritz, taken during the EMS Annual Meeting 2018 in Budapest, in which he talks about his views on the role of the EMS.