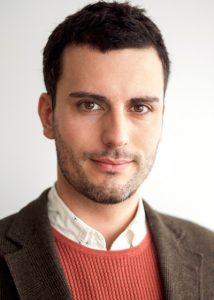 The EMS Tromp Award for an outstanding contribution in biometeorology 2019 is presented to Diego G. Miralles, Associate Professor in Hydrology and Climate at the Faculty of Bioscience Engineering of Ghent University (Belgium).
He was nominated with the paper: “Land–atmospheric feedbacks during droughts and heatwaves: state of the science and current challenges”, D.G. Miralles, P. Gentine, S.I. Seneviratne, and A. J. Teuling., published in April 2019 in Ann.N.Y. Acad.Sci., 1436, 19-35, DOI 10.1111/nyas.19312, 2019.

The prize was presented during the EMS Annual Meeting 2019 on 10 September 2019 in Copenhagen, Denmark, and Diego Miralles gave the award presentation in session OSA2.2 Agricultural meteorology:

Diego graduated in Environmental Sciences from Autonomous University of Madrid (UAM, 2005) and in Hydrology from Vrije University Amsterdam (VUA, 2009). He completed a PhD in Ecohydrology at the same university (VUA, 2011). In 2009 he joined the Hydrology and Remote Sensing Laboratory of the USA Department of Agriculture (USDA, Washington D.C.).

Diego’s earlier research focused on satellite retrievals of soil moisture and the work on land–atmosphere fluxes that would result in his PhD thesis, ‘Evaporation in the Global Water Cycle: Analysing Land Evaporation Using Satellite Observations’. This work embraced the challenge to develop GLEAM, a global retrieval model of terrestrial evaporation solely based on satellite data. Since then, GLEAM has been used in hundreds of applications, ranging from agricultural studies to climate model benchmarking.
In 2011, Diego moved to a faculty position as Assistant Professor (Lecturer) at the University of Bristol (UK).

During the following three years he became an independent academic, combining his passion for science and teaching. His research on global ecohydrology and remote sensing continued to evolve, yielding several first author articles in high-impact journals. In 2015, he became again affiliated to the VU Amsterdam and took an external professor position at Ghent University (Belgium), where he turned tenured in 2017. Over the last two years, his research team at Ghent University has consolidated thanks to personal grants from the European Research Council (ERC), or the Dutch Scientific Council (NWO), and the lead in projects from the European Space Agency (ESA) or the Belgian Federal Science Police Office (BELSPO) among others.

The centre of his scientific interest remains to understand the dynamics of the global water cycle and the impact of climate change on hydrology. He concentrates on investigating land–atmospheric feedbacks, the characterization of evaporation at the regional scales, the investigation of hydrological and climatic extremes, the impact of hydro-climatic anomalies on vegetation, and the study of the influence of ocean–atmospheric oscillations on terrestrial hydrology.